Some three-four years ago, there was a study going around the Internet which proved that pigs were smarter than dogs. It hit the dog owners and lovers quite hard in the head. How could a pig, that we consider much inferior by default, be more intelligent than a dog, right? But then again, if you think of that famous Winston Churchill saying: “A cat will look down to a man. A dog will look up to a man. But a pig will look you straight in the eye and see his equal”, you could conclude that a pig is smarter than a dog,  but also that a cat is smarter than man? Wait, no! This does not work either. 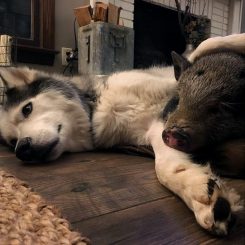 Let’s take it step by step.

What the study said?

As we were telling you, there was a study circulating the internet a few years ago. It proved that pigs were actually smarter than dogs. It claimed that dogs were outperformed by pigs on IQ tests. Pigs scored higher than our pet friends on many cognitive abilities and competed with many intelligent species such as elephants, dolphins, chimpanzees. They excelled at puzzles, mazes and all -around long term memory tests. More than that, pigs do actually have emotional intelligence. They feel empathy, they actually react to happiness, sadness, they cooperate with one another and learn from their peers.

Also Read:  Why does my dog lick my legs?

It is also believed that pigs can also understand language. They can be taught a symbolic alphabet that stands for simple objects and actions. A video that circulated on the internet a few years ago shows how a pig named Moritz is placing coloured blocks into their corresponding holes, much like the games that our kids are playing when they are little babies. One of these studies was carried out by Lori Marino, a self-declared vegan who wants people to be more aware of the cognitive complexities of pigs. She says that people tend to treat pigs as very inferior beings when they can actually be placed on the same par as dogs and cats.

Other studies show that pigs are, indeed smarter than dogs, but do not have the same emotional intelligence as dogs do.

Is it relevant to compare dogs’ intelligence to that of pigs?

There are a few considerations. If pigs were, indeed, more intelligent, then it would just humiliate us since we have more in common with dogs, socially, than we have with pigs. We have built a few bridges in communicating with dogs throughout history. We’ve made them our loyal friends, they’re in our homes, in our lives.They’re protecting us, we’re pampering them. It’s a mutual respect and affection. On the other hand, there are voices that say dogs might not be as intelligent now as before just because of us. There are some who claim that dogs have lost 20% of their cerebral cortex throughout their domestication process since we’ve taken more of their thinking job. On the other hand, we, humans, might have lost some 10% of our olfactory and auditory abilities because we’ve started to rely more on our canine friends.

All in all, the social norms have decided that dogs are our pet friends, they’re here to help us, we know how to train them and communicate with them better than pigs. Pigs might be smarter, but this doesn’t have much relevance. Comparing intelligence across species does little good, since you cannot actually compare the roundness of, say, an apple to that of a pear, right? To what use? But this doesn’t mean we are on the side of dogs against pigs. No, no way. Pigs should also be thought of as part of our animal world. 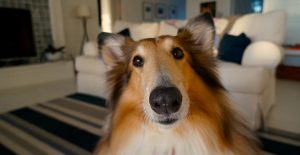 Are dogs smarter than humans? 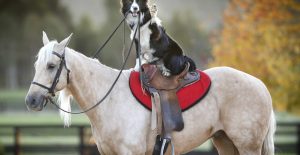 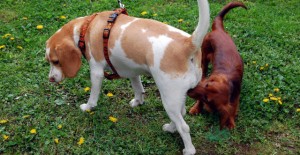