You’ve probably watched your dog closely and seen him drink water countless of times. Have you ever wondered how does he actually do that? I mean, obviously, he cannot just put a bottle or a glass to his mouth and drink like us, humans, instead he sticks his tongue in it and starts lapping at it. It looks pretty normal and simple on the surface, but have you ever wondered what he actually does with his tongue. It seems like a super fast activity and dogs do it from a very young age without no problem at all. Have you tried to drink water the way dogs do? Just lapping your tongue at a bowl of water? Did it work? Not really, right? You couldn’t really send water from your tongue to your throat in good quantity so that you wouldn’t spend the whole day drinking it. We know it. But could dogs drink water from a glass like we do? Yes, we know they do not use their forelimbs like we do, but if they could use their “hands”, could they really drink water from a glass? Not really. Let’s see why!

Dogs do not have cheeks, but have ladle tongues

So, have you ever thought about this? Just imagine a dog’s mouth! They have a mouth opening that is extended all the way up to their “cheeks”. They have “incomplete cheeks” if you want. It’s a feature that all carnivores have and it’s designed to help them open their mouths widely to better grab and kill their prey with a more precise and stronger bite. So, because of their “cheeks-but-not-cheeks” feature, they cannot drink water like we humans do. If they tried to suck in water, they would also suck in air through their incomplete cheeks. Basically, they cannot seal their mouths to that degree in which they can drink water in a “non-tongue-lapping way”.

So, they had to adapt. As you very well might have seen, dogs use their tongues to drink water. They have a special technique in doing so. They are basically lapping their tongues at water in order to create a water column. What exactly is a water column? Well, imagine you are plunging your hand in and out of a bowl of water, imagine you are doing it fast and the water splash forms some sort of a column. Then dogs just bite on that water column. Is this a little bit unexpected, right?

You might have observed your dog drinking water and so that his tongue was curled up in some sort of ladle. You might have thought that was how he transported water from the bowl into his mouth. Actually, that is not the way. He curls up his tongue in a ladle shape so that he could hit the water more effectively and thus create that water column we were telling you about above. The bigger the contact with water, the bigger the water column. Dogs are such genius! Or maybe it is mother nature?!

Are dogs too messy with water?

Sometimes dogs just like to have a little fun. Who doesn’t, right? So they just try to create bigger and bigger water columns and in doing so, they smash their tongues in water creating a big mess sometimes. If it bothers you, you can buy special, no-spill bowls that would reduce your average mop time in case your dog is such a big water player! You can do nothing about it. Dogs usually love water. Give them some space!

19 Dogs Who Think They’re Better Than Us 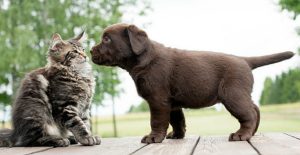